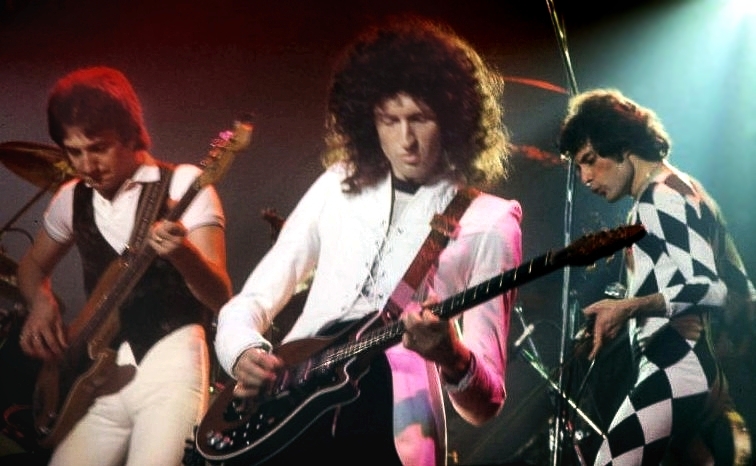 Brian May and Roger Taylor, two students at university in London, formed a psychedelic rock band called Smile in 1968 along with Tim Staffell on bass and vocals. Smile enjoyed a strong local following in West London and played a number of gigs, many of which were attended by Staffell’s friend from Ealing Art College, Farrokh ‘Freddie’ Bulsara, a Zanzibar-born singer

who had been educated in India, including learning the piano, and who had moved to London with his family at the age of 17.

In 1970 Staffell decided to leave Smile for another band, and Bulsara quickly asked if he could join the band as singer. May and Taylor agreed and tried a number of bass players, eventually settling on a quiet electronics student named John Deacon in 1971. The band rehearsed incessantly and spent a lot of time and energy on developing not only a musical style, but also a visual style spearheaded by art student Bulsara, who adopted the stage name Freddie Mercury and proposed the name Queen for the band.

Queen’s first album was released in 1973 following a record deal with EMI. Titled Queen it was reasonably successful, with one song – Keep Yourself Alive – receiving radio airplay. They followed it with two albums in 1974 – first the Queen II, which gave the band their first chart single in the UK with Seven Seas of Rhye, and next the album Sheer Heart Attack which was a major success. The songs on this album represented a myriad of different styles and the standout single, Killer Queen was a big seller on both sides of the Atlantic.

Fired up by the success of what was effectively an experiment in combining many differing styles of music, Queen’s next album was a game-changer. A Night at the Opera (1975) was multi-platinum in Britain and America and, of course, included the song Bohemian Rhapsody which remained at number one in the UK for a record-breaking nine weeks. This album also included Queen’s ‘poppiest’ single so far – the John Deacon classic You’re My Best Friend.

The follow-up to this album was A Day at the Races (both albums had been named after Marx Brothers films) which included the songs Somebody to Love and Tie Your Mother Down, and the following year, 1977, saw the release of News of the World which included the anthemic classics We Will Rock You and We are the Champions. 1978’s album was Jazz, possibly Queen’s first slight disappointment as sales and fan responses were somewhat muted. Slightly bruised by this, the band decided to take a break from recording and step up their touring. They played sell-out concerts all over the world and released a hugely popular live album called Live Killers in 1979.

The next album to be released was The Game in 1980, and this was hugely successful, selling more copies than any other Queen album to date. It included two huge hits: Crazy Little Thing Called Love and Another One Bites the Dust, and two huge ballad-anthems called Play the Game and Save Me which quickly became popular at Queen concerts. The band also wrote and recorded the soundtrack for the film Flash Gordon at this time.

No Queen album was released in 1981 but the band teamed up with David Bowie to make a very successful single called Under Pressure. This song appeared on the 1982 Queen album Hot Space, which saw the band take a different direction towards funk and disco styles. The album was not successful compared to previous Queen albums. In 1984, The Works was released and fared better, largely thanks to the hit singles Radio Ga-Ga (written by drummer Taylor) and I Want to Break Free (written by bassist Deacon).

Freddie, Brian, Roger and John were becoming frustrated with Queen, and arguments in the studio were commonplace. Each took a break from the band and pursued solo projects with differing levels of success, until Bob Geldof approached them to ask if they would perform at his huge benefit concert Live Aid which was held in 1985 to raise money for the Ethiopian famine. Queen agreed, and their twenty-minute performance stole the show and rekindled their hunger for recording and touring. In 1986 they released the album A Kind of Magic with a very successful single of the same name, and toured extensively, performing memorable concerts at Wembley Stadium and Knebworth Park – the latter concert being the last time Queen performed together live, though they were not to know this at the time.

Queen’s parties when they were touring were notorious and Freddie particularly was flamboyant to the point of recklessness. At some point in the 1980s he contracted the HIV virus, about which little was understood at the time particularly in the way it could be transmitted. From 1987 onwards, it became clear that Freddie was losing weight and becoming more ill-looking, though he flatly denied any illness and refuted all tabloid claims that he was suffering from AIDS. He released a number of solo songs, most notably Barcelona, which was a duet with the opera singer Montserrat Caballé, and Queen released an album called The Miracle in 1989 which included the single I Want It All.

It may have been repeatedly denied to the press, but the members of Queen knew from around late 1989 that Freddie did indeed have AIDS, and they worked incessantly to record as much music as they could while Freddie was still strong enough to work. In early 1991 they released the album Innuendo, which included the title track, which went to number one, and a song that perhaps demonstrated that Freddie was ‘saying goodbye’ to the musical world –  The Show Must Go On.

Freddie Mercury released a press statement on November 23rd 1991, confirming that he had AIDS. He died the next day, from pneumonia brought on by the disease. Bohemian Rhapsody was released by the band as a double-A side single with These Are the Days of our Lives from the Innuendo album, with all proceeds going to an AIDS charity. It went straight to number one and stayed there for five weeks, and a video of These Are the Days of our Lives, recorded by Freddie and the band only six months before he died, was a poignant farewell from the talented front-man. It showed a very gaunt Freddie, filmed in black and white and singing directly to the camera, with the last shot a close up on his face as he declared to his fans ‘I still love you’.